MediaTek is preparing to launch the Dimensity 2000 processor, which is the company’s first version with a 4nm manufacturing accuracy, and has already spotted the vivo phone with the new processor, which scored one million points in AnTuTu tests.

The vivo V2184 scored a million performance points with the MT6983 processor, or now known in leaks, the Dimensity 2000 chip. 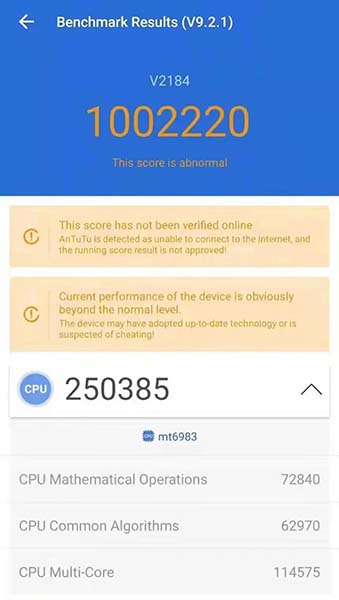 Expectations indicate that the vivo phone that appeared in the AnTuTu database is one of the company’s versions of the X series, and the phone has scored 1002,220 points, according to reports published via Ice Universe and Digital Chat Station.

On the other hand, the Red Magic 6 phone scored 858,734 points with the Snapdragon 888 processor chip, while the iPad Pro devices with the M1 chip scored a performance exceeding one million points in the tests.

MediaTek also confirmed, through a teaser video of its upcoming processor, the superior performance of the processor, and also the improvement of battery life in the devices.

The DCS report also indicated that the Dimensity 2000 processor includes a Cortex-X2 core at 3.0 GHz, three Cortex-A710 cores, and 4 A510 cores, and is expected to include an ARM Mali-G710 MC10 graphics card.