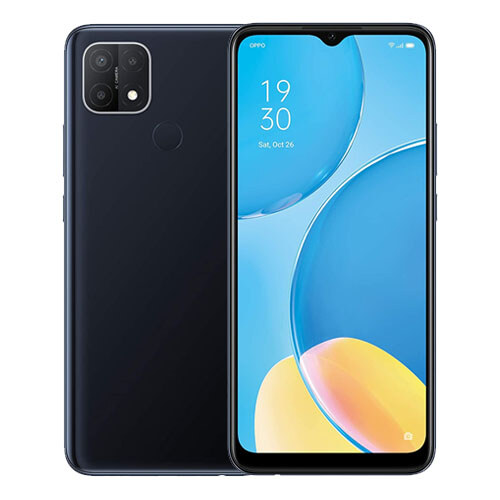 Two months after the Chinese company, Oppo,
announced the Oppo A15 phone, the A15s phone arrives to be an upgrade to the first device in some of the things that we will learn about in this article, and OPPO seeks to satisfy its fans in the Arab countries, so the company has a large number of users in various Arab countries, we will start with the basic specifications For the Oppo A15s phone, then we take a look at all the features and strengths of the device with a discussion of defects in the phone that may affect the experience of use, so that you can evaluate the mobile and learn whether it will be suitable for you or not? Let’s get to know what is new in Oppo.

The phone comes with a plastic back and a plastic frame as well, the back is glossy and fingerprints can be easily seen on it, and the frame of the rear cameras is square shaped curved on the sides and protrudes slightly from the level of the back. At the bottom of the frame there is a fingerprint sensor, and the front most of it is a screen, but there is a large bottom edge and also the front camera is present with a pinch.

The weight of the phone is about 175 grams, it is light and the thickness of the device is also low, about 7.9 mm.

Supports fourth generation networks in addition to the third and second generation, and two nano-size communication cards can be installed.

The screen comes with a new aspect ratio of 20: 9 to get a better experience during content and playing games, and the screen colors are 16.7 million color views.

The screen occupies about 83% of the front end of the mobile because there is a large bottom edge and a notch for the front camera.

The phone runs on OPPO ColorOS 7.2 interface, which is based on Android 10.

In terms of performance, the phone comes with a Mediatech Helio P35 / octa-core processor, 12 nm, and a PowerVR GE8320 graphics processor.

The phone is available in one version in terms of memory and RAM, which is 64 GB eMMC 5.1 + 4 GB RAM, and the available versions vary from market to market and from country to country.

Supports installing a memory card to increase the internal storage space or transferring files, and it can be installed in a separate port from the two connection cards.

The fingerprint sensor is located on the back of the phone, under the cameras, and the mobile phone is equipped with other sensors such as proximity, acceleration and recognition of the degree of ambient light.

For cameras, the mobile phone comes with three rear cameras, as follows.

The second is a 2-megapixel macro for close-up photography.

The third camera, with a resolution of 2 mega pixels, is used to determine the depth and isolate images.

There is a back LED flash, and the camera supports many shooting modes such as: professional mode, night mode, panorama, isolated portraiture, time-lapse photography, and slow motion.

You can shoot videos in 1080p @ 30fps quality with the front or back camera.

You can connect to Wi-Fi networks of the following generations: a / b / g / n / ac, and it supports HotSpot, Wi-Fi Direct, and Bluetooth 5.0.

In addition to the fingerprint, the phone is equipped with a facial recognition feature that works using the front camera and software.

The phone comes with a 4230 mAh non-removable battery, a mini-type charging port, and a 10-watt charger included in the box.

The mobile is equipped with an FM radio receiver to receive broadcasting stations without installing any additional applications or consuming the Internet.

Supports 3.5mm headphone jack, but no headphones included in the box.

This device differs from the Oppo A15 phone in the front camera and offers more memory and random memory only.

Double the screen resolution is only second in HD.

The processor performance is poor.

The design of the phone is beautiful.

The weight of the phone is light and the phone can be held with one hand.

You can install two SIM cards and a memory card at the same time.

Contents of the box for OPPO A15S