A new Motorola product appears on the FCC platform 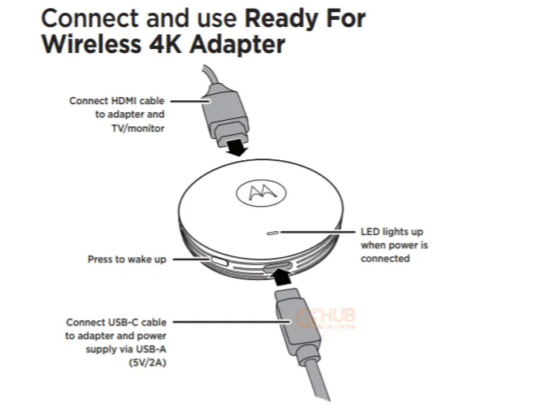 The current generation Motorola Edge range comes with a feature called Ready For that allows users to connect their phones to any Windows computer or monitor. With an external display and a desktop user interface, users can have a better multimedia experience and multitasking.

And now, according to the FCC, Motorola may soon release a product dedicated to the hardware for Ready For.

A new device from Motorola called the “Ready For Wireless 4K Adapter” has been approved by the FCC, codenamed MD-02.

According to the documentation, the product comes in the form of a disc with the well-known “Motorola Batwing” logo and an LED indicator on top. The sides have an HDMI port, a USB Type-C port, and a power button.

The device description says it extends the phone experience to any compatible TV or screen. This indicates that the adapter can be used with any smartphone.

And since it appears to be developed by EZcast, it will most likely be compatible with both Android and iOS.